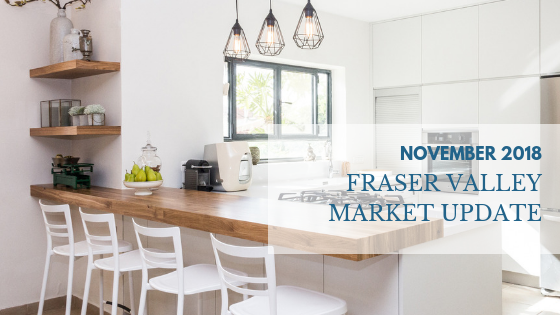 via the Fraser Valley Real Estate Board

SURREY, BC – The Fraser Valley housing market saw slight increases in both total transactions and overall inventory this month after sales hit their lowest point for the year in September.

The Fraser Valley Real Estate Board processed 1,155 sales of all property types on its Multiple Listing Service® (MLS®) in October, a decrease of 35.8 per cent compared to the 1,779 sales in October of last year, and a 11.6 per cent increase compared to sales in September 2018.

“While slight, this is the first time since May that sales here have been on the upswing.” said John Barbisan, President of the Board. “We’re beneath typical activity levels for this time of year but it’s good to see that buyers and sellers are still finding success this season.”

Active inventory for the Fraser Valley in October finished at 7,746 listings, increasing 1.3 per cent month-over-month and 41.3 per cent year-over-year.

A total of 2,776 new listings were received by the Board in October, a 5.8 per cent decrease from that received in September 2018, and a 12 per cent increase compared to October 2017.

“We’re in a much better spot in terms of overall inventory compared to this time last year, and now closer to a more balanced market. Attached inventory in particular has seen notable gains, doubling year-over-year for townhouses and nearly tripling for apartments.”

For the Fraser Valley region, the average number of days to sell both an apartment and townhouse in October was 31. Single family detached homes remained on the market for an average of 39 days before selling.